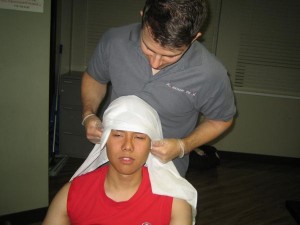 Concussion is a term often used after a patient has sustained a head injury. It refers to when the brain has been ‘shaken’ by an incident, eg. a blow to the head.

St Mark James First Aid manual explains how brain has space between itself and the bone of the skull which allows it to move a little.

Causes often result from traffic incident, injuries during sporting activities, falls or blows to the head in a fight.

The impact does not necessarily have to be directly to the head. First Aid Training says indirect blows can still ‘rattle’ the brain in its shell due to the forces exerted.

Concussion is normally temporary, but does cause extensive disturbance of brain activity. This can cause impaired consciousness, usually only lasting a few minutes.

Further symptoms of concussion can include:

Concussion does not necessarily require medical attention, however the patient should be advised to seek medical assistance if they experience symptoms such as headache or blurred vision after the injury.

St Mark James Training says a first aider should treat the patient for the impaired consciousness. Their level of responsiveness should be monitored, along with their pulse and breathing. The patient should continue to be monitored even after they appear to have recovered as their level of responsiveness can deteriorate further in serious injures.

You should ensure that the patient has another responsible adult who can care for them and monitor them after they have recovered from the incident.

Any headache, nausea, vomiting or excessive sleepiness experienced after the initial head injury should be treated with concern and the patient should get medical advice. It is also precaution to check for a neck injury if the head has experienced an injury as advised by St Mark James Training.

There are other types of head injury that you may encounter.

Cerebral Compression will also produce a deteriorated level of consciousness, but may progress to unconsciousness. Other possible symptoms include:

A fracture of the skull is a serious injury and can be recognised by the following:

In both cerebral compression injuries and skull fractures, urgent

medical assistance is required. If you are in any doubt over a patient with a head injury, First Aid Classes say seek urgent medical advice as all head injuries are potentially serious.