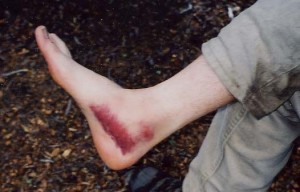 Internal bleeding is often one of the most critical consequences of trauma to the body. The blood leaked from the blood vessels or organs may be difficult to detect but they require emergency medical assistance as they can easily become life-threatening to the victim. Internal bleeding may arise from even slight major trauma. It can occur immediately or after a few hours. Bleeding may stop on its ownbut severe bleeding would usually require surgery.

Even though any organ can be damaged and lead to internal bleeding, there are certain regions in the body that are considered most serious and require medical attention immediately.

Internal bleeding often occurs after major physical injury, usually due to trauma. There are two main types of trauma that may lead to internal bleeding:

If one is unsure, it is always better to assume to worst and treat

for internal bleeding. If possible, have someone call for an ambulance immediately. Give first aid while waiting for the ambulance.

Internal bleeding is a medical emergency and giving first aid might just help save a life. Enrolling in first aid courses can help treat and manage victims of medical emergencies, especially those with bleeding, whether internally or externally, injuries.