Jellyfish stings are relatively common problems when swimming, surfing or diving. Their stings often lead to no serious problem but there are a few species that may cause life-threatening problems to humans. It is important to note that jellyfish found in the shore, or those that appear to be dead, are still capable of stinging and causing pain to humans. Jellyfish stings will continue to cause pain while the tentacles remain in contact with the skin.

Jellyfish are found in both the cold and warm parts of the ocean and more dangerously, along the shorelines. These jellyfish contain tentacles that have microscopic barbed stingers (stinging cells) that release venom. This venom is usually released in response to threat (thus it is used as a means of protection) or when capturing their prey before consuming them.

The Most Dangerous Jellyfish Stings

Majority of jellyfish species do not cause harm to humans, particularly those with short tentacles. The most toxic specie of jellyfish known to human is the Australian Box-like Sea Wasp. The other dangerous jellyfish stings may come from:

Signs and Symptoms of Jellyfish Stings

Signs and symptoms of jellyfish stings usually emerge as soon as the stinging occurs. These include:

The more serious of jellyfish stings to watch out for are:

For severe reactions to jellyfish stings, the following signs and symptoms may occur:

Most cases of jellyfish stings can be managed at home with appropriate First Aid Training. There is usually no need for emergency medical services unless serious or severe signs or symptoms manifest. To administer first aid on jellyfish stings, do the following steps: 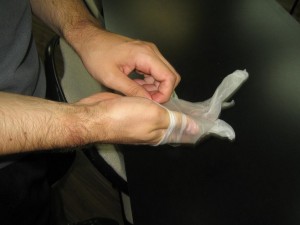 If possible, wear gloves to help eliminate contact between tentacles and the rescuer.

Jellyfish have tentacles that have microscopic barbed stingers that release venom. Jellyfish stings are relatively common problem that may vary in severity and can usually be managed at home.

View all posts by Mikha Canon →